We request continued prayers for my husband's mother D. She has been sick for almost four weeks, alone in the hospital for three, and is now on her second stretch of being on a ventilator in order to give her lungs support for longer while they heal.

After a day and two overnights of misery and inconsolable crying jags despite maximum Advil, I took David to the orthopedist today and David came home with a hard cast. The doctor said the immobility alone will greatly help David's pain more than the splint. I kept quiet and did not mention that the hard cast would also stop more incidences of big, boisterous siblings stepping on David's injured leg! 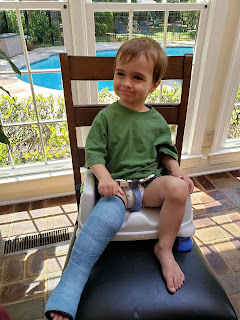 David has had his cast on only since lunchtime, but early observations are that the crying is much reduced and I'm seeing precious smiles sometimes again. 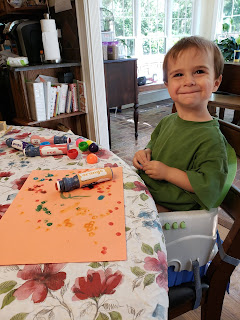 Because I think it will make an interesting glimpse into history one day--like we enjoy reading about the Spanish Influenza of 1918--I will describe my experience going to the orthopedic office today. It was like nothing I've ever experienced, enhanced because Chris has been doing our grocery shopping during the lockdown so I literally go nowhere off this property and live in a bizarro-world bubble.
I was slightly late, after navigating the hospital and medical complexes downtown, arriving at 10:30 for my 10:30 appointment. I walked up to the door of the building where a nurse wearing a mask was stationed at a table outside (as there were nurses at every entrance to the building). All over the ground was painter's tape with instructions for where to stand.
I stood six feet away from the nurse as she asked me many questions and filled out an entire worksheet on me. She asked if I had traveled outside North Carolina or South Carolina (only ten minutes away) and I may not have been able to enter the building if I had traveled. She took my temperature and David's using a thermometer that needed to come within about one inch of our skin but without touching it: she leaned way far out so as to stay as far away as possible from us.
After we got permission to enter the building, we were told that there were too many people in the lobby, so we stood in a separate line, each party six feet apart. The nurse was in contact with the interior lobby via walkie talkie throughout. I ended up standing in that line for 30 minutes while holding 28-pound David and could not set him on the ground, so I was wishing I had brought his stroller!
Finally the nurse said the lobby was empty enough that she could let me in. She escorted me so that I would not touch any door handle or elevator button, and she even pushed the interior elevator button and ensured no other party got onto the elevator with me.
The elevator opened directly into the orthopedic lobby upstairs where only three parties were allowed to be at a time. There was more tape all over the floor, directing us to stay six feet away from the administrative staff behind the counter. It was difficult and awkward to exchange our medical information, address, phone numbers, and insurance because both the staffer and I had masks on, muffling our voice, and I was having to raise my voice to get across the six feet so everyone in the room could hear me.
After ten minutes answering questions at that counter, I was handed an iPad (disinfected in between each use, as were the pens on the counter) to answer thirteen pages of more medical information.
It was nearly an hour to get through "security" before I saw the doctor. Some of these measures are helpful, some are perhaps strange, and I don't know what I think of it all beyond that it is so interesting historically that I wanted to record it. 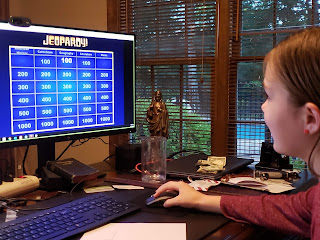 Like her brother last week, tonight Mary (11) hosted a Jeopardy game for a few girlfriends. She created it at Jeopardy Maker online. It was very fun!