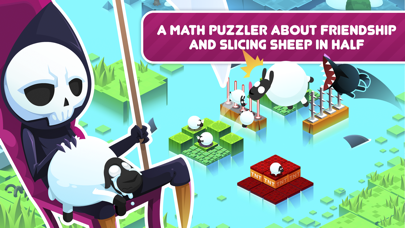 "It's smart, it's pretty... what makes it shine is the dark comedy found in killing cartoon animals just to satisfy some arbitrary numerical requirements." - 8/10 by DESTRUCTOID

Divide By Sheep is a math puzzler about the Grim Reaper's devious plan to make some sheepy friends. Grim can only befriend the dead, so he decided to unleash a great flood and drag the sheep under. Now stranded on small islands and sinking fast, the sheep need you to help them reach safety.

It plays similar to classic counting games with dark humor where you need to cross a road or river, and can't have specific combinations of sheep, wolves, etc on the same raft. Here though the results are intentionally filled with gore and blood (unless you turn it off in the settings). It's a funny, dark math puzzle game.

You save the little animals by solving clever math puzzles. Divide By Sheep is a game of addition and subtraction by any means possible, where puzzles start off fairly easy and playful, yet quickly escalate in both difficulty and dark humor.

- 120 mind bending puzzles spread across 4 worlds
- Dark humor inbound, parental guidance advised!
- What happens when you divide a whole into half? You get two halves!
- Lasers, wolves... oh, and also a kraken (The Grim Reaper's pet)
- Drown sheep. Or wolves. Or pigs. Do whatever it takes to succeed
- Fabulous art-work that quickly goes from cute to disturbing

USE PARENTAL CONTROLS BEFORE GIVING THE GAME TO KIDS! Main menu has the option to disable blood.

A brand new, free update brings World of Ruins, the concluding chapter of Divide By Sheep and Grim Reaper's quest to make some friends.