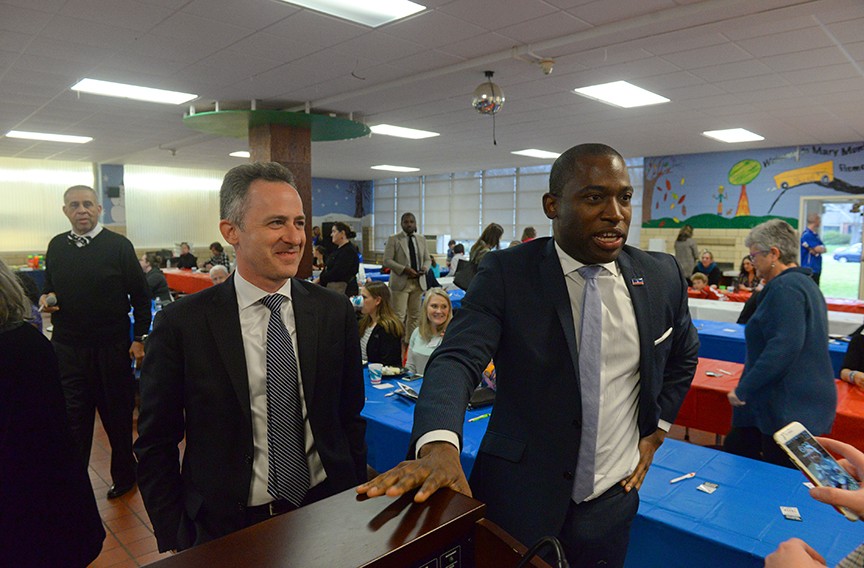 Campaign contributions from vendors doing business with the city smacks of Tammany Hall corruption. If we are going to do right by the children in our city, we need to stop playing politics.

I don’t know about you, but I’ve had more than enough.

The squabbling ad absurdum between Richmond Mayor Levar Stoney and the Richmond School Board reached the stratosphere recently when Richmond Public School Superintendent Jason Kamras told members of the board that it would take six years to build a new George Wythe High School.

The notion not only strains credulity, but it insults the intellect. Consider for a moment that it only took eight years from 1961 when U.S. President John F. Kennedy first challenged our nation to land a man on the moon, to when the world stared transfixed at the heavens, or in front of televisions cheering, as astronaut Neil Armstrong jumped onto the surface of the moon.

Now, folks, building a high school is not rocket science.

But given the protestations, news conferences and finger-pointing games that have been going on since five of nine School Board members voted to have “schools build schools” instead of continuing to allow the city to oversee the construction process, some might think it an endeavor comparable to putting a man on the moon.

The hubris and media manipulation of the past few weeks culminated in a crescendo of caterwauling and dire predictions June 1 when Kamras presented a timeline to the board saying that a new George Wythe High School could not be built until 2027.

Kamras, Stoney and a minority of School Board members had to know that by presenting a timeline with no source, they would force yet another round of hardball questions from other members.

Perhaps their gambit was to make the School Board appear incompetent and impugn its integrity by insinuating – once again – that members who demanded accountability were on a power trip and denying a sorely needed new high school for the students at George Wythe School.

One need only do the math to see that five of nine members finally got fed up with paying millions more for the schools than either Henrico or Chesterfield counties. Sure enough, board members Mariah White of the 2nd District, Kenya Gibson of the 3rd District, Vice Chairman Jonathan Young of the 4th District, 6th District member Shonda Harris Muhammad and 5th District member Stephanie Rizzi all wanted to know where he got his information.

Rather than explain that he and his staff did their due diligence and gathered information from a variety of experts at the Virginia Department of Education or from the procurement offices in any of the surrounding school districts, Kamras stated the information came straight from the City of Richmond.

It is understatement to note that they were not impressed with his answer. When asked in an interview later why he chose to present only the city’s data, Kamras told Style Weekly: “I trust the city, I trust the mayor, why should I ask around?”

Board member Muhammad stated outright that she doesn’t trust the data and that she is done talking and wants to see some action. White and Rizzi noted that it makes no sense that building a high school should take six years.

Judging from the comments of board members and the public, Kamras needs to appreciate that if a majority of the School Board wants him to stop playing politics with Stoney, he needs to get busy doing the job he was hired to do: Kamras needs to remember that he answers to the board and not to Stoney.

Moreover, given the enormity of the academic and actual needs of the children in Richmond – where one out of four children live at or below the poverty line – there is not enough time to continue playing mind games.

When Kenya Gibson, one of the authors of the April resolution, questioned the integrity of the information and suggested there was an inherent conflict of interest concerning the reliance on the city as the sole source of information, she was interrupted. School Board Chairwoman Cheryl Burke 7th District rebuked her for being rude.

Burke then demonstrated her firm grasp of the meaning of the word by repeatedly talking over and refusing to allow Gibson to ask questions about the timeline. When challenged by Gibson and others, Burke claimed that she thought Gibson’s comments were unprofessional and lectured the board, like the elementary school principal that she once was, and that she expected more from the board’s behavior.

One parent, Shannon Bennett Dowling, recently urged School Board members not to be lured by the siren calls for collaboration from the mayor’s office. In a public comment, she reminded the board that the city has a record of rushing school construction projects, a process that leads not only to “uncontrolled costs and poor-quality work, but to buildings that do not prioritize the needs of our community.”

To understand why Stoney is pushing so hard to retain control of the construction, she and other parents have suggested the answer can be found by scouring data on the Virginia Public Access Project that tracks campaign money.

She and other parents are right. The general contractors and AECOM, the project manager employed by the city, all made hefty campaign contributions to Stoney’s campaign coffers and his PACs.

Stoney’s office did not return a call for comment concerning his acceptance of campaign donations from vendors actively doing business with the city by press time.

If we are ever going to do right by the children in our city, School Board members, Kamras and Stoney need to heed the words of James Baldwin, who said, “Children have never been very good at listening to their elders, but they have never failed to imitate them.”

Enough is enough. In fact, it is more than enough.

Carol A.O. Wolf is a former newspaper reporter who served on the Richmond School Board from 2002 to 2008. She writes regularly about the Richmond Public Schools at saveourschools-getrealrichmond.blogspot.com.

Opinions expressed on the Back Page are those of the writer and not necessarily those of Style Weekly.