How to Reach Traumatized Students

When Ben started flipping desks in the classroom, his teacher Heather Boyle ushered the rest of her first-grade class into the hallway for safety.

Things had begun to unravel a few moments earlier, when Ben—whose real name isn’t being used, to protect his privacy—struggled with a math lesson. He crawled under desks, bumping into other children’s legs. When his classmates complained, Boyle asked him to come out. “I don’t know how to do this stupid math,” he screamed.

“It’s okay,” she said. “You’re going to come sit with me, and I’m going to help you.” But as his frustrations grew, furniture went airborne. Boyle was forced to clear the room, call the principal for help, and wait until Ben calmed down.

Elementary-school teachers in Bartlesville, Oklahoma, had begun to notice that situations like this one, which happened in 2018, were becoming more common throughout the district in recent years. The school struggled to find a way to both support children like Ben and create a safe learning environment for other students. Often, students with severe behavioral outbursts—“room clearers,” as they are sometimes called—were simply punished or expelled from school. In 2019, with growing awareness that extreme behaviors can be triggered by past traumas, Bartlesville’s school leaders decided they needed a new approach.

Boyle, who has been teaching young kids since 1997, took charge of a new, trauma-informed classroom in Bartlesville’s Ranch Heights Elementary School: the ATLAS program, or the Alternative Therapeutic Learning Academic Setting. Based on research, and in partnership with a local mental-health center, ATLAS helps kids who have experienced early trauma or dysfunction learn to process and manage emotions so they can return to a typical classroom.

Bartlesville is a small, family-oriented city of about 36,000, where folks take their children to the Kiddie Park amusement center for cheap rides on weekends or visit Pioneer Woman Mercantile for cinnamon buns. It’s also an oil-and-gas town—a headquarters for ConocoPhillips, where the parents of many of Boyle’s students work, whether in accounting or on a rig. Majority white, with a sizable Indigenous population, Bartlesville’s median household income is about 10 percent below the U.S. average; most of Boyle’s students come from low-income families.

Ben was bright, with a passion for science and Pokémon. He had a large smile and a sharp sense of humor, and he amused Boyle with his stories and keen negotiating skills, bargaining with her for five minutes on the computer in exchange for five math problems. But he struggled with outbursts, especially during stressful situations like challenging classroom assignments.

Negative childhood experiences can have a lasting impact on a child’s ability to learn. Those experiences might be relatively common events, like divorce or the death of a loved one. Other traumas are more extreme, like physical abuse, sexual abuse, a parent struggling with addiction, or separation from family due to immigration status. A person’s level of trauma can be measured using a tool known as the ACE (Adverse Childhood Experience) score. Though it may be an imperfect measurement of childhood trauma, it helps quantify the level of abuse, neglect, or dysfunction a person has experienced in early life.

Research shows that children with high ACE scores often have difficulty learning; trauma can get in the way of healthy brain development and can lead to an overactive stress-response system. Even seemingly minor incidents, like a brush on the shoulder in a crowded school hallway, can flood their bodies with the stress hormones adrenaline and cortisol and trigger an outburst. These children are little powder kegs, and they can be difficult to manage in a typical classroom. Oklahoma has some of the highest ACE scores in the country, in part because of the state’s high incarceration rates; when adults are in prison, they and their children all suffer.

In the ATLAS program, students learn in what Boyle called a “self-contained classroom” for half of the day—grades K–2 in the morning and grades 3–5 in the afternoon—and then spend the other half at a local Boys & Girls Club. (Next year, the children are expected to be at the school facility full-time.) At school, they work on academic, social, and emotional learning with the support of Boyle, aides, therapists, and a behavioral-health coach.

The program also incorporates education and psychological research, which shows that an important part of teaching kids with trauma is recognizing their triggers in the first place. Once teachers understand a student’s individual triggers—like loud noises or touch—and notice signs of agitation early, they can try to deescalate the situation before it blows up. Making a child feel safe in the classroom is paramount. And a child’s brain thrives on repetition and order, so trauma-informed teaching also involves regular, rhythmic activities like drumming, mindful breathing, and visualizations.

[Read: The kids aren’t all right]

Boyle starts every day in her classroom with body-based rhythmic activities, like banging on drums and shaking shakers. She and her staff expand the children’s vocabulary so they can better express their emotions, and she has the children eat lunch family style in the classroom, at a dining table, to learn certain social skills; there, they practice saying common phrases like “Please, pass the scrambled eggs.” They hold parents’ nights regularly, where families work together on projects like decorating ornaments or cookies.

Boyle and her team also walk students through “do-overs”: If a backpack is thrown in anger, the child is handed back the backpack and given the chance to handle the situation differently. Whenever the do-over is successful, no matter how many times it takes, they celebrate. “Often, we see kids doing their own do-overs or asking for a do-over on their own,” she told me. “The power of a do-over is pretty amazing.” Boyle can give those students the attention they need, while students in traditional classrooms can learn without interruptions.

Ben, the student who melted down during the math lesson, was often triggered by assignments that felt overwhelming, so Boyle helped him “chunk” large projects into smaller tasks, and has found alternative workspaces for him to use where he feels more comfortable. She also helped him recognize and record his pulse and heart rate, so he could identify when he was heading toward an outburst, and she encouraged him to take short walks to calm himself.

The ATLAS class has been a learning experience for Boyle, too. “The first day of school I wanted to walk the kids out to the playground,” she said. “I thought, ‘There’s twelve of them, right? How hard can this be?’” It turns out that even walking down the hallway was plenty hard. Students jumped, punched each other, and touched displays on the bulletin boards. But the next day, she had the students focus on clapping and snapping to a rhythm while they walked. The change worked like magic. These kids don’t need expensive interventions; they just need a teacher to pay attention to what works for them.

More than anything else, Boyle has learned that building an emotional connection with students early on is essential. That connection starts over the summer, when she reaches out to students with phone calls, email, letters, and sometimes visits to their homes. Once school begins, she has her students help decorate the ATLAS classroom so they can build a sense of community and feel ownership over the space. Every day, they are greeted with a personalized greeting—a high five, a pinkie shake, whatever they choose. And Boyle makes a point to share some of her own life with them.

Boyle can relate to her students, because she has her own trauma. When she was young, she said, her father “struggled with demons from his time in the Vietnam War.” He also wrestled with addiction, and her mother stretched to support the family on her own. In the midst of a chaotic home life, school became a refuge. Teachers allowed her to do her homework in the classroom when the electricity in her house was turned off, and let her family into a school sporting event for free when her brothers were playing. When a teacher noticed that she wasn’t eating lunch because she was embarrassed by her free-lunch card, the teacher had the school issue her a different-looking card. “I always say, teachers saved me,” Boyle said, “because I think they really did.”

This background helps Boyle reach not only her students but also their parents—many of whom have also experienced trauma. “One thing that has become kind of tricky is helping parents understand that we’re not there to judge them,” she said. “We’re there to help ... As I gain relationships with families, I can share that I came from the same background.” She tells them, “It’s okay. We’re all in this together.”

The program is still new, but before schools closed in March for the coronavirus, attendance rates for students in the program were up—and suspensions were down. Boyle also noticed many significant but less quantifiable signs of success. One of her students, for example, used to be sent home for behavioral problems so frequently that his mother, a single mom, was unable to hold a job. After the child entered the ATLAS classroom, suspensions ended. His mother was able to find work, and the family moved out of a homeless shelter.

In late May, I was invited to join Boyle’s class on Google Hangouts. When the program opened up, I could see her, other staff, and the underside of a young boy’s chin. He was breathing heavily.

When Boyle gently asked for an explanation, her student revealed that he was in the process of running away from home on his scooter, because his dad had punished him. He was quickly convinced to go back home, where he continued to talk with Boyle and staff about viral TikTok videos. Eventually two other students showed up to the “hangout” using their parents’ cell phones; connections kept getting dropped, and audio was glitchy. Their attention was divided by siblings in the background and video games on the screen. Conversation was hard to follow.

When schools closed, virtual education for Boyle’s ATLAS program became limited to these chats. Like many low-income students in this country, many of her students lacked proper computers and internet connection, or their home environments weren’t conducive to supporting online learning, so Boyle provided packets of learning materials and dropped off “porch bags” at their homes every Friday with food, books, and games to keep them engaged.

The pandemic hit her already-traumatized students particularly hard, and remote learning put  one of their lifelines on hold. But Boyle has already gained their trust, and she knows the rest will follow once school resumes in person: banging on drums, practicing table manners, understanding emotions, all while gaining math and reading skills.

For Ben, the ATLAS program has proved to be a major success; he made such progress with the interventions and care from Boyle and her staff that he will return to a mainstream class in the fall. 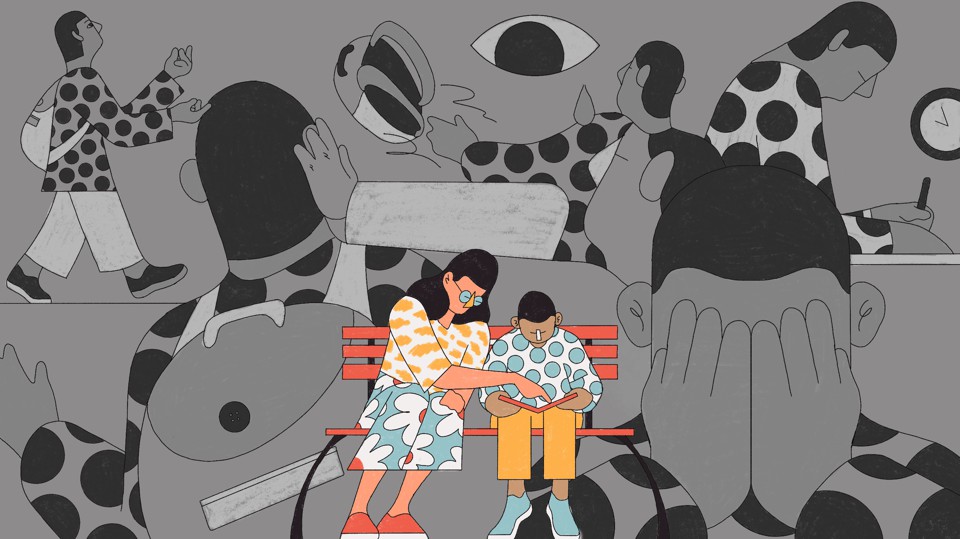