Ending the Youth Screen Addiction Means a Change in Parenting. 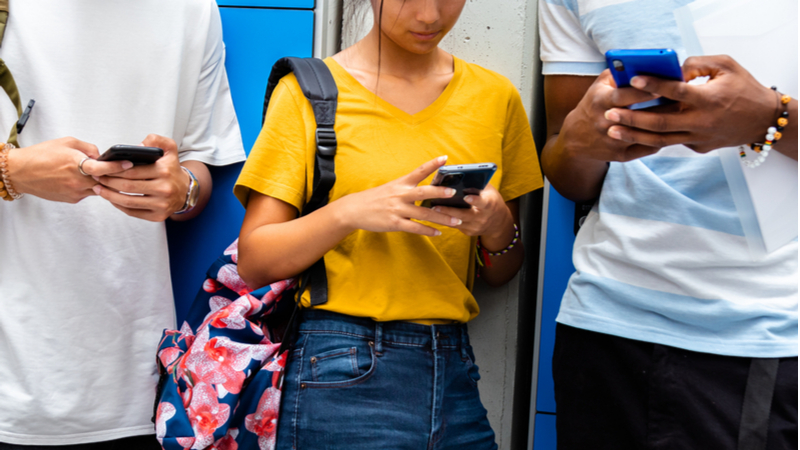 There was no more timely back-to-school reading than the New York Times essay by Jean Twenge and Jonathan Haidt, “This Is Our Chance to Pull Teenagers Out of the Smartphone Trap.” They argue that Covid lockdowns have only accelerated the link between youth saturation with digital media and deteriorating mental health and wellbeing. Equally important, the authors offer useful advice on how to once and for all reverse the youth addiction to the ubiquitous glowing rectangle.

Twenge, in particular, has been omnipresent in this arena, even penning the name iGeneration for those born between 1995 and 2012, the first generation to reach adolescence after smartphones became widespread.

Her research into the digital culture amplifies a chain of problems among youths today: mental health, loneliness, isolation, academic performance, and physical deterioration. The measurements of each category are as surprising as they are dismaying.

First, “addiction” to devices is not hyperbole. A 2019 report by Common Sense Media found that American teenagers spend an astounding nine hours a day with digital technology, which includes social media, streaming video, listening to music, playing games; this total does not include screen time on homework. “Tweens” aged 8 to 12 are spending six hours with media; preschoolers—yes, kids under five—with their own smartphones or tablets averaged two hours of screen time a day. Most important: These figures are all pre-Covid; in the past 18 months, daily life for most kids has involved remote screen time for much of the school day.

In 2019 research Twenge paints it simply: “Light users of digital media reported substantially higher psychological well-being than heavy users; heavy users (vs. light) of digital media were 48% to 171% more likely to be unhappy, to be in low in well-being, or to have suicide risk factors such as depression, suicidal ideation, or past suicide attempts. Heavy users (vs. light) were twice as likely to report having attempted suicide. Light users (rather than non- or moderate users) were highest in well-being.”

Nine years ago, Caitlin Flanagan wrote in Girl Land about the harm of social media on adolescent girls, noting “Allowing girls to have internet connections in their bedrooms is one of the worst decisions a parent can make.” Just last week her prophecy was confirmed by a Wall Street Journal article, Facebook Knows Instagram Is Toxic for Teen Girls, Company Documents

It is also hardly a leap to conclude that this screen time leads to isolation. The Cigna 2020 Loneliness Index, which finds that nearly 79% of Gen Z respondents reported feeling lonely. And its consequences: an American Psychological Association study reports that more than a quarter of GenZ self-report their mental health as fair or poor.

But it’s not just mental health. The Kaiser Family Foundation reports that one out of three children aged 10 to 17 are obese or overweight. The CDC breaks that down further: Obesity prevalence was 13.4% among 2- to 5-year-olds, 20.3% among 6- to 11-year-olds, and 21.2% among 12- to 19-year-olds. A  recently published article in the Journal of the America Medical Association (JAMA) Network, found that youths gained more weight during the COVID-19 pandemic than before it. The greatest change occurred among children aged 5 through 11 years old and the prevalence of obesity increased from 36.2% to 45.7%. Another CDC study notes that the rate of young people ages 10 to 19 with type 2 diabetes increased by 95% over the 16-year period, from 2001 to 2017.

Now, mental and physical health and academic progress can be quantified – but how about traditional social participation and involvement? A compelling study from the National Alliance for Youth Sports notes that 70 percent of kids in the U.S. stop playing organized sports by the time they turn 13. Not only does this give heft to the appalling obesity figures but it’s no doubt linked to isolation: Quitting a team pulls a kid away from exactly the camaraderie, sustained effort, and inevitable adversity that young people need to become a functioning member of a school community and a society.

Twenge and Flanagan are parents, as are two other women who have for a decade raised concerns about modern American parenting, Lenore Skenazy of Free-Range Kids and recently, Michaeleen Doucleff, an NPR reporter who has studied parenting on three continents.

I’ve followed all four for years. Like them, I’m a parent, having helped raise three sons – two young GenXers, one older GenZ. Like these women, I’ve seen these two generations up close for two decades and have spent thousands of hours around parents and kids all over the nation.

After a while, the sheer number of parental and kid interactions that I’ve had produce enough anecdotes to reveal patterns. And in my real world of parenting – perhaps unknown to elite literary critics, childless scolds, and well-meaning educational administrators and psychologists – I know that the turning point is indeed regulating the digital world, which as noted above, leads to shortcomings in every aspect of a kid’s life. Hence, here’s what I did, in a very basic fashion, to limit the grip of the glowing rectangle and guide my kids to be reflexive in good conduct and character.

Early on, as with any parent, I saw how my sons were transfixed by screens, principally video games and YouTube videos. Hence, I severely limited the boys’ screen time to two hours a week for viewing anything online outside of homework. None of the three received phones until they were in 11th grade.

Isolation was not tolerated. I encouraged – demanded – my kids get involved in group activities, community service, and team sports from the age of five onwards, which enhanced their social skills and resiliency. There is always the wonderful lesson of competition, from 2nd-grade rec soccer to Division-1 Rugby. I was relentless in admonishing my sons: When you go out on an athletic field, be prepared that half the people in the bleachers are screaming at you to fail – yes, the parents of the kids you’re playing against. Confronting the pressure – this is how the real world works, not the fantasy world of Call of Duty – Special Ops. Public judging, real demands whether on a stage, in front of a class, in a gym or on a field, is crucial to building steadfastness and character.

As for self-confidence, I took a page from the “World’s Worst Mom” – Lenore Skenazy, who in 2008 endured national condemnation for having the audacity to allow her 9-year-old son to ride the New York City subway alone. She subsequently founded Free Range Kids and then Let Grow Movement promoting childhood independence and resilience, with the simple admonition: “When adults step back, kids step up. We believe today’s kids are smarter, safer and stronger than our culture gives them credit for.”

She’s right – and I lived her experiment. Starting when they reach the age of 5, I would send my sons into Skenazy-style situations. I’d have them go into a convenience store with a memorized list of items and a 20-dollar bill. Alone. This became customary and the older they got, the more challenging were the tests – son, you order for all of us at the restaurant, you take care of our tickets at the airline counter, you go with me and buy your own clothes.

The above are only a few examples; as I outlined in my book on raising resilient kids, there are many more.

A Beginning to End the Smartphone Trap

1. Lock up phones during school, so students can practice the lost art of paying full attention to the people around them, including their teachers.

2. Delay entry into social media, ideally keeping it entirely out of elementary and middle schools. At present, many 10- and 11-year-olds simply lie about their age to open accounts, and once that happens, other kids don’t want to be excluded, so they feel pressured to do the same. The platforms should — at a minimum — be held legally responsible for enforcing their stated minimum age of 13. Since social media platforms have failed to do so using post-hoc detection methods, they should be required to implement age and identity verification for all new accounts, as many other industries have done.

Another superb idea highlighted by researchers Camilo Ortiz and Stephanie De Leo in Quillette: “Most new [home] routers allow parents to block devices from accessing the Internet. The same can be done with iOS and Android devices. It’s a set it and forget it approach that we have found far more effective than repeatedly asking a teen to hand over a phone.”

Most of all, it’s parenting and pushing back against a ubiquitous and disturbing digital culture. Parenting requires the ability to say no, and particularly in this age, to say no often. No to screens – no to endless gaming and streaming and messaging and cute TikTok videos and YouTube and Netflix binging. Again, it’s appalling that kids spend an average of nine-plus hours a day on screens; that four out of five feel lonely in the dynamic world of neighborhoods and school. Or that one of out every three kids is unable to climb three flights of stairs without gasping – or quitting.

Reversing these trends must start somewhere and Twenge and Haidt, Ortiz and De Leo offer the ideal starting points for parents who must fight the overwhelming of the digital culture. Parents are adults and kids are kids – there is no negotiating around the parameters of an aspect of life whose consequences are well detailed. It begins by saying no.

This post was originally published on the author’s blog, NelliganBooks.com.

Support The Good Men Project on Patreon to help us build a better, more inclusive world for all.

The post Ending the Youth Screen Addiction Means a Change in Parenting. appeared first on The Good Men Project.