Convocation 2021: ‘Adventure of a Lifetime’ begins for thousands of new UW–Madison students 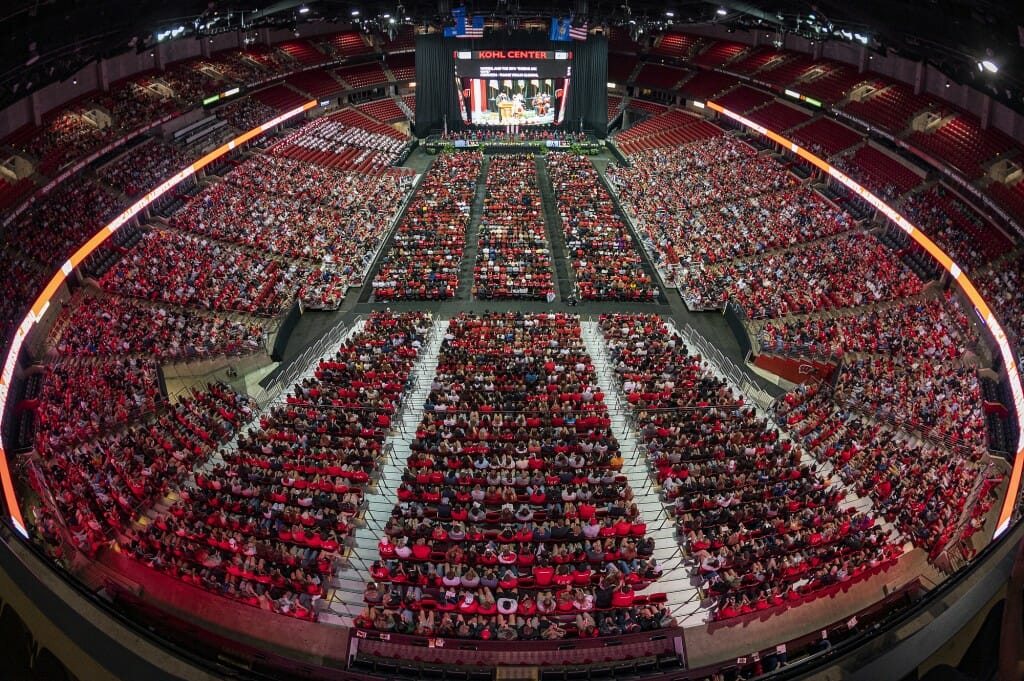 The Chancellor's Convocation for New Students, held at the Kohl Center, was part of Wisconsin Welcome programming. Photo by: Bryce Richter 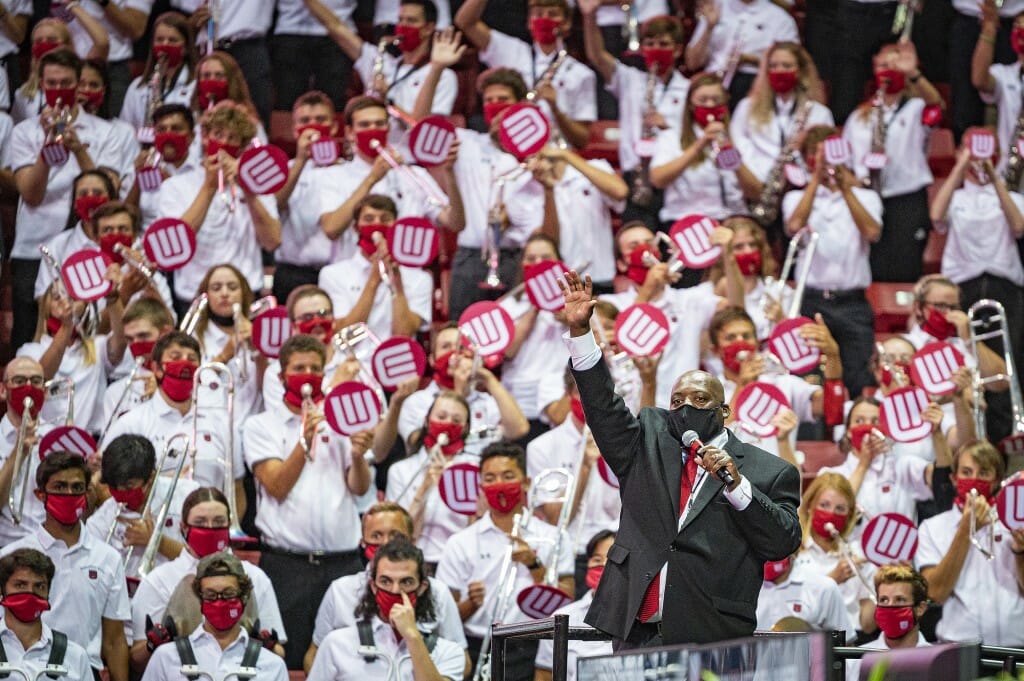 The UW Marching Band, under the direction ofCorey Pompey, warmed up the crowd. Photo by: Bryce Richter 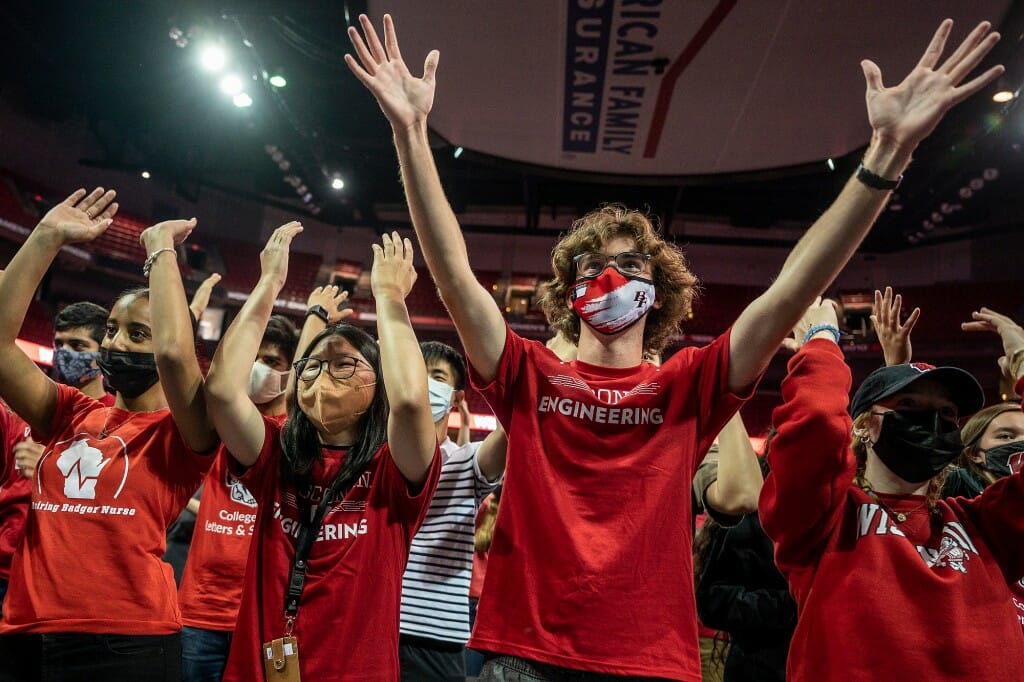 Students danced along with the Marching Band. Photo by: Althea Dotzour 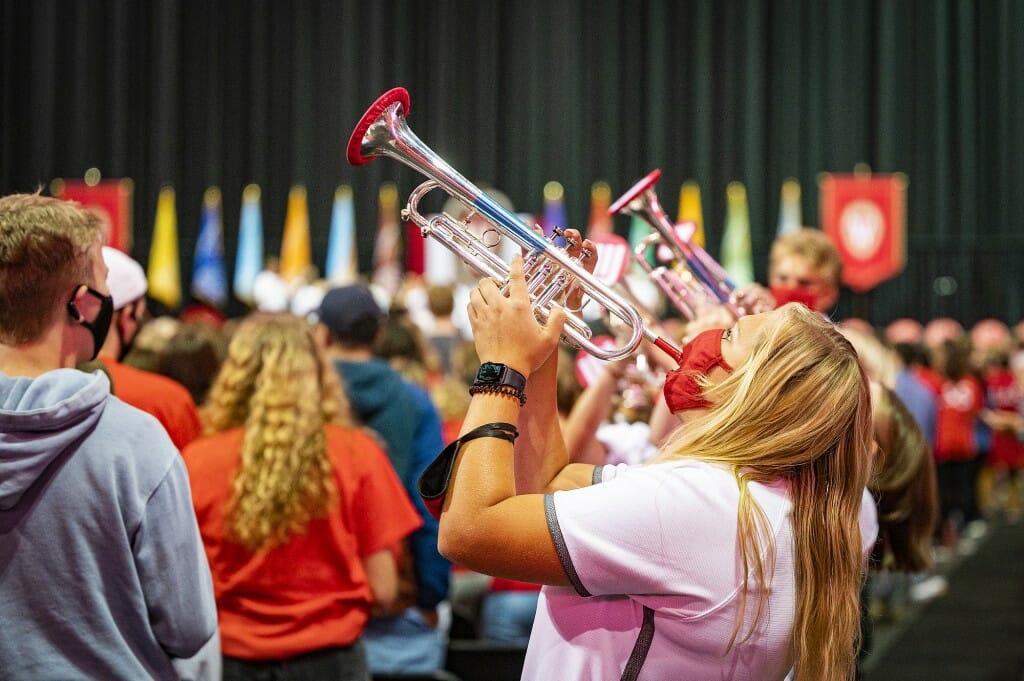 Members fo the UW Marching Band performed before the start of the event. Photo by: Bryce Richter 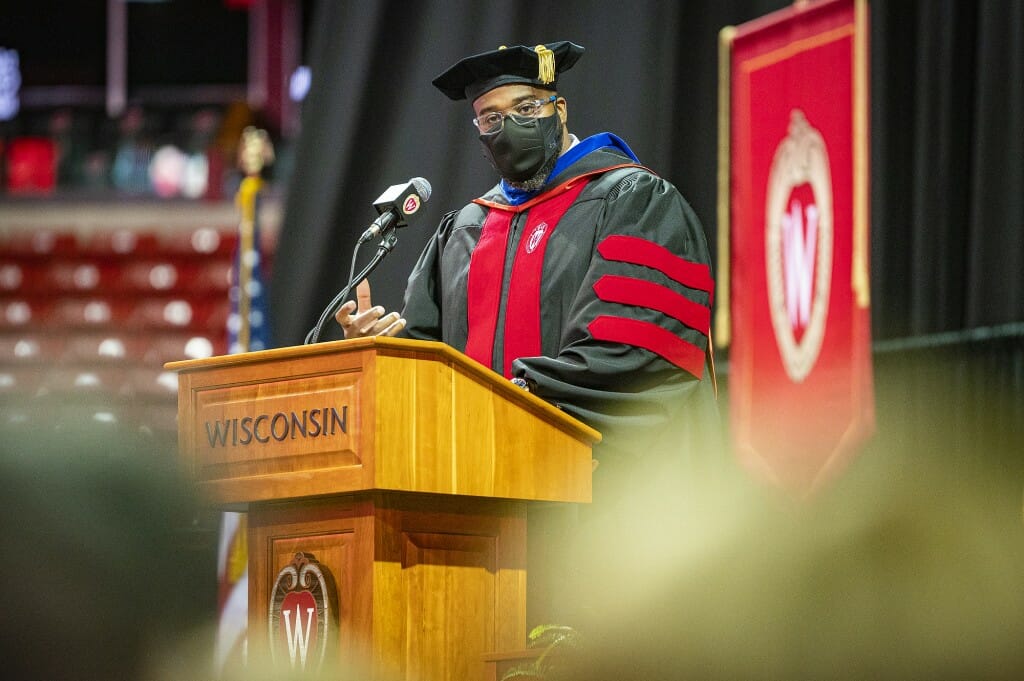 LaVar Charleston, chief diversity officer and UW–Madison alumnus, told students, "This is a giant step that will chart the course for the rest of your lives.” Photo by: Bryce Richter 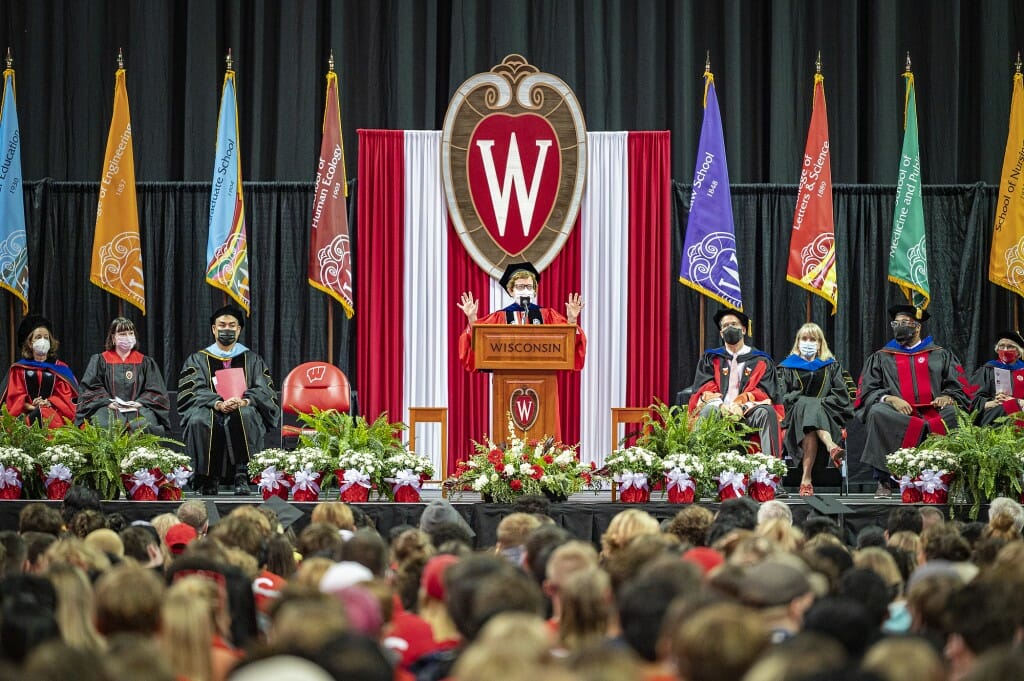 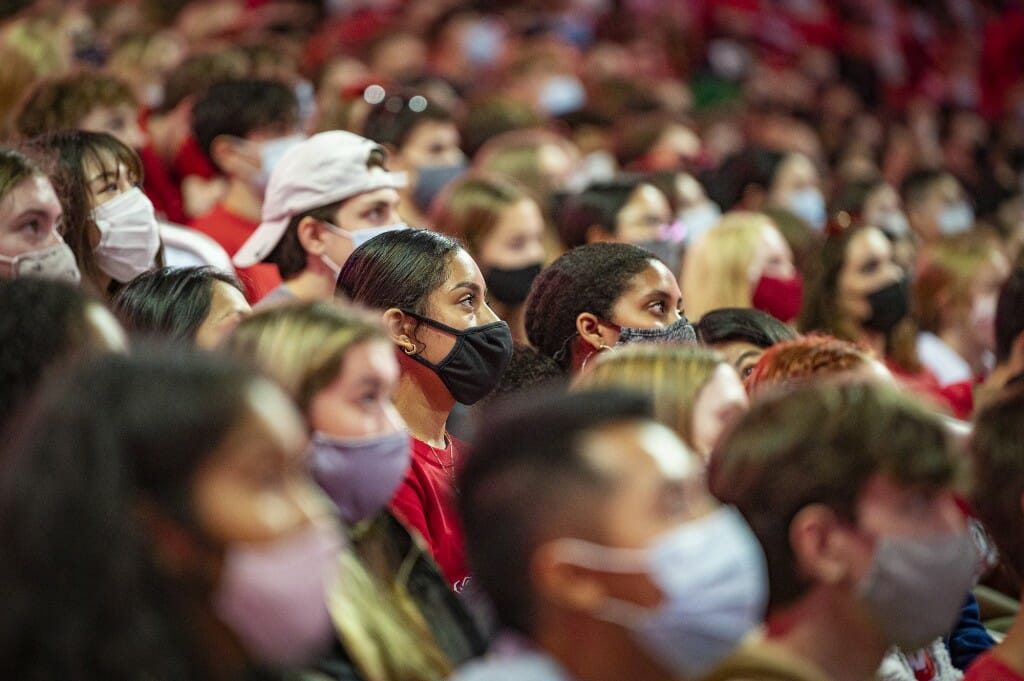 Thousands of first-year and transfer students listened to speakers. Photo by: Bryce Richter 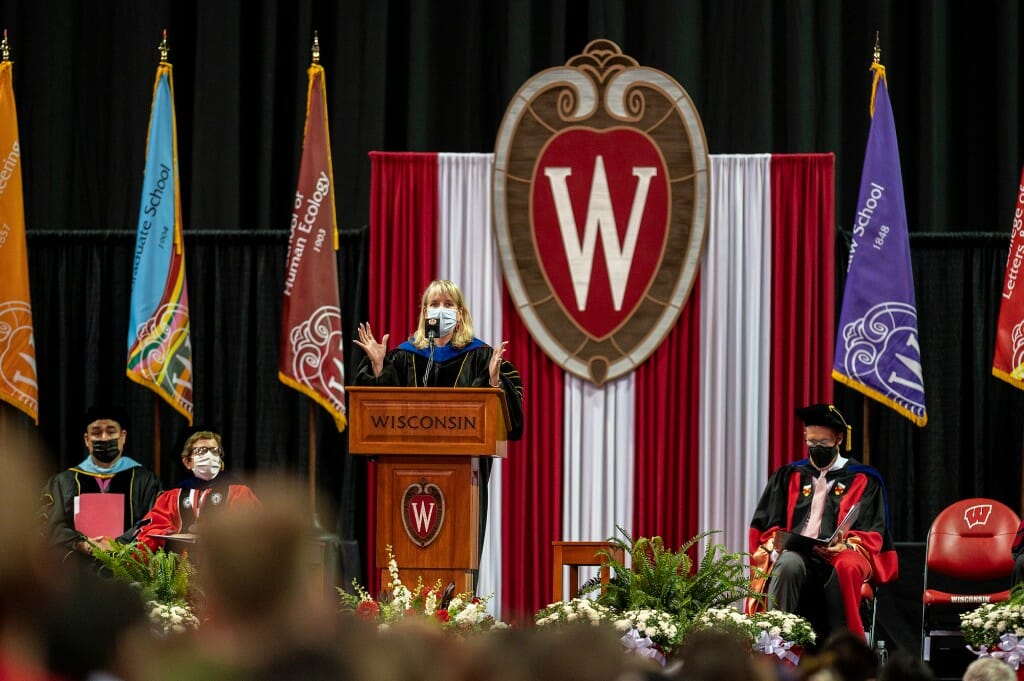 Lori Reesor, vice chancellor for student affairs, struck themes of community and inclusiveness in her remarks. Photo by: Althea Dotzour 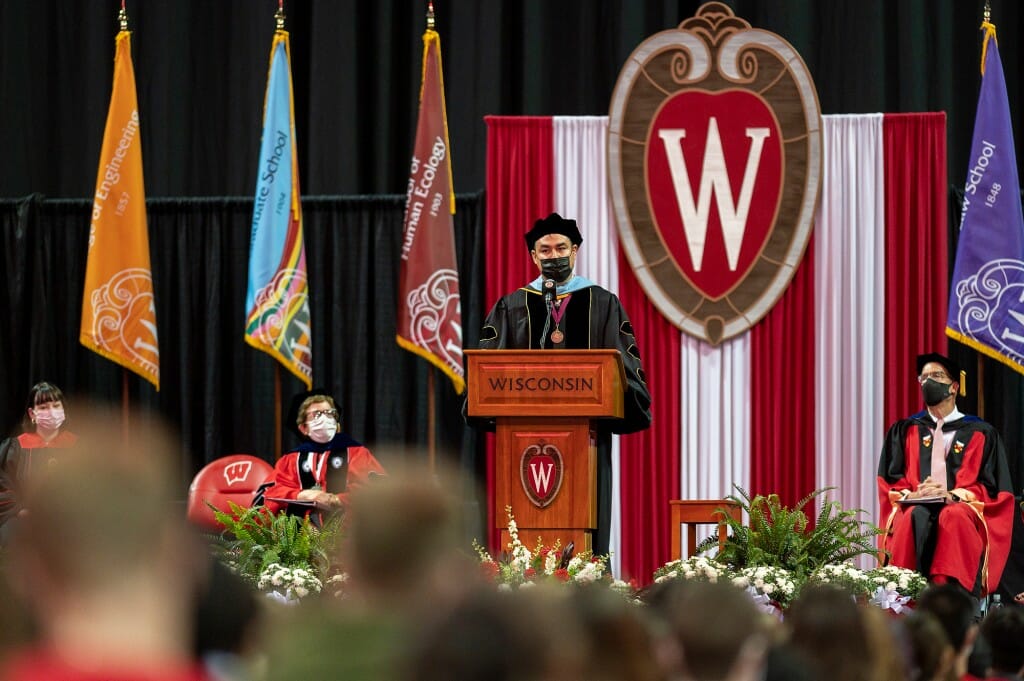 Brian McInnes, associate professor in the School of Human Ecology and the Leola R. Culver Professor in Nonprofits and Philanthropy, gave the Native Nations welcome. Photo by: Althea Dotzour 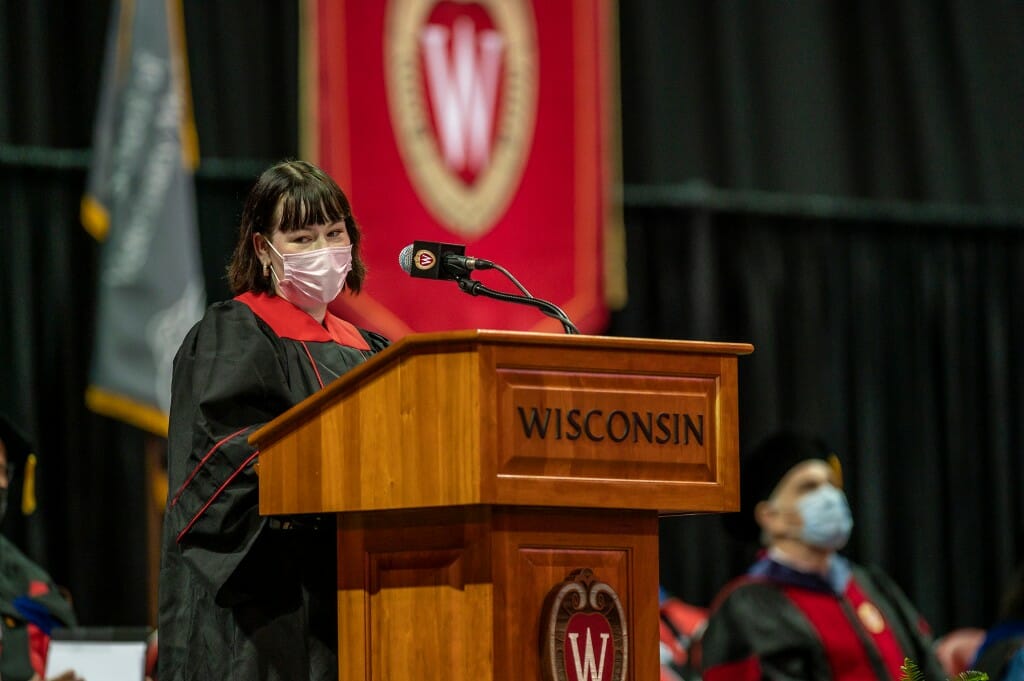 Student speaker Kyla Vaughan told incoming students that finding community has been the biggest blessing for her on campus. Photo by: Althea Dotzour 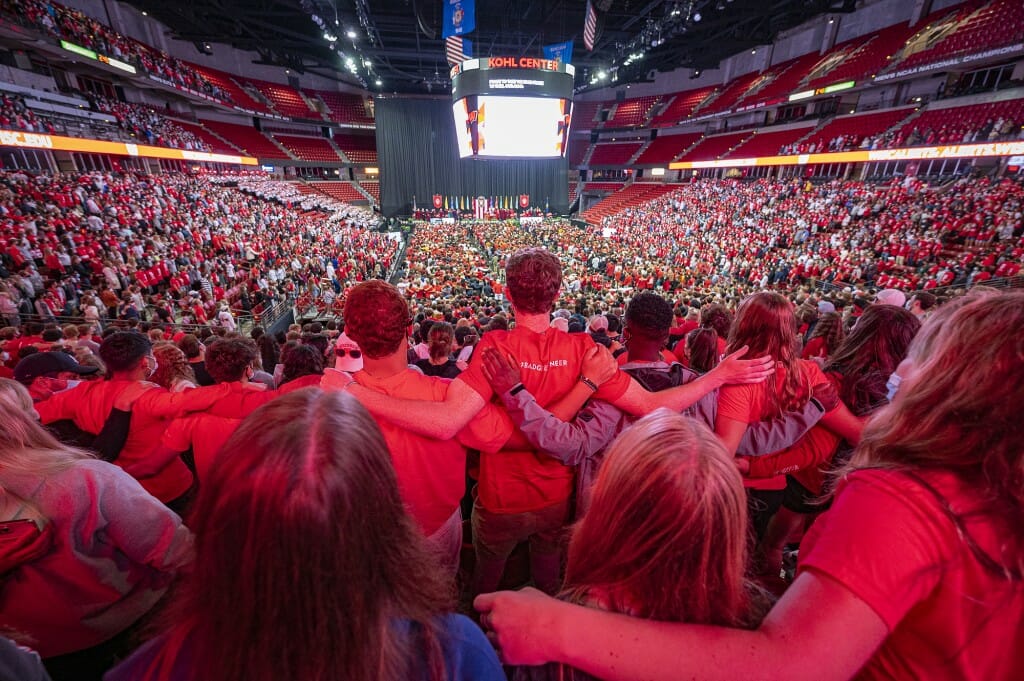 Students sang “Varsity” at the conclusion of the event. Photo by: Bryce Richter 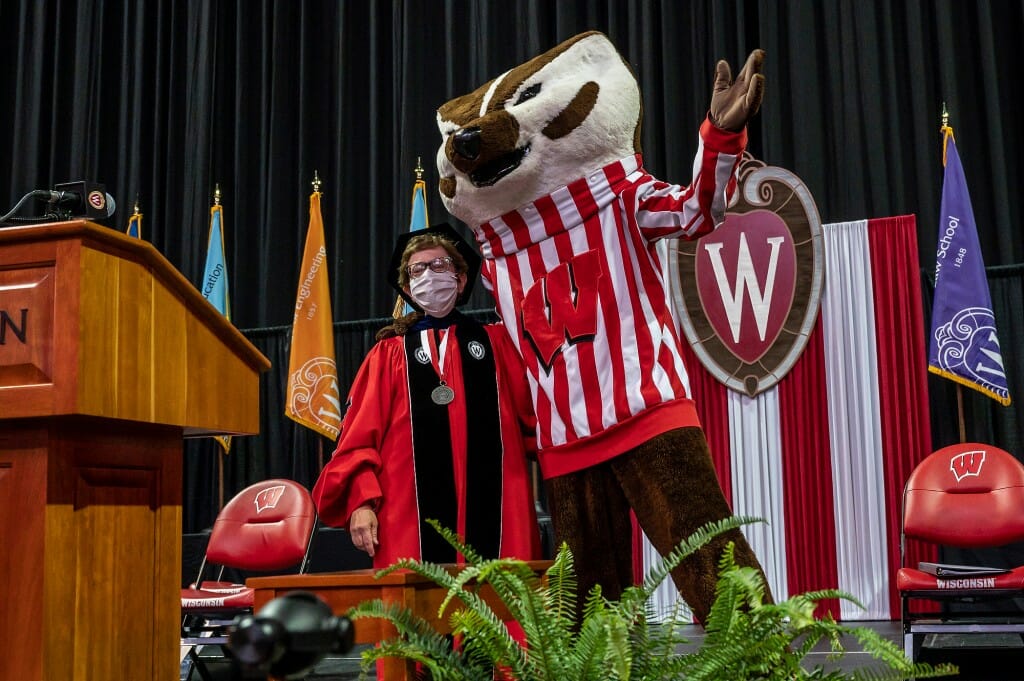 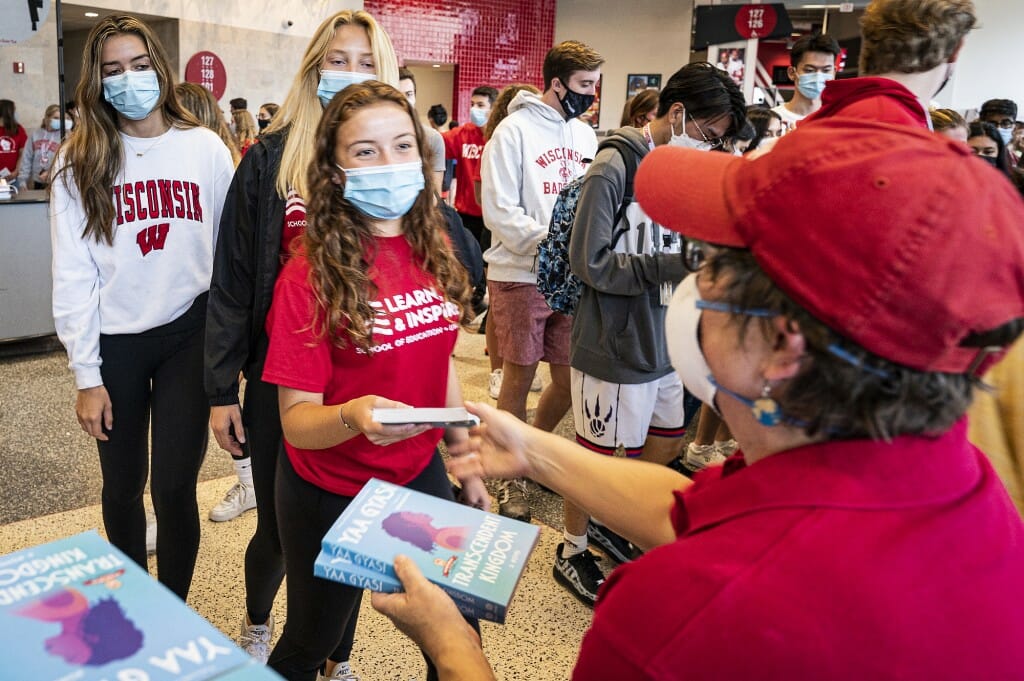 Speaking to thousands of new students at convocation Friday, UW–Madison administrator LaVar Charleston invoked one of his favorite Coldplay songs.

“I would like to personally welcome you all to the ‘Adventure of a Lifetime,’” said Charleston, an alumnus and the university’s chief diversity officer. “If you all feel like I felt when I first set foot on this campus as a new Badger, it’s exhilarating. It’s also a little scary. But importantly — and I am a living, breathing example of this — this is a giant step that will chart the course for the rest of your lives.”

Convocation serves as the formal beginning of the academic experience for new UW–Madison students. Held at the Kohl Center, it’s always a momentous event, perhaps never more so than this year.

The freshman class is expected to be the largest ever at around 8,400. (An official count comes later in September.) More than 1,000 transfer students also are new to campus this fall.

And then there’s the pandemic. Friday’s convocation was the first large, indoor gathering on campus in nearly 18 months. Chancellor Rebecca Blank said she hopes it ushers in a more normal academic school year for students, with all of the things that make UW–Madison special.

“Which is a way of saying get ready for game days at Camp Randall, popcorn on the Union Terrace, trivia competitions, intramural sports from basketball to pickleball, and the best Innertube Water Polo Tournament you’ve ever seen,” she told students.

Blank said the high vaccination rates on campus and in the surrounding community, coupled with an indoor face-covering mandate and other safety measures, should provide a robust level of protection against COVID-19.

Convocation has its serious moments, but there’s also a lot of fun to be had. The UW Marching Band, under the direction of Corey Pompey, warmed up the crowd with songs that included the theme from the television show “Friends” (co-written by alumna Allee Willis) and, of course, “On, Wisconsin!”

Senior Kyla Vaughan, the student speaker for convocation, told incoming students that finding community has been the biggest blessing for her on campus. She said she identifies as queer and struggled to fit in where she grew up.

“I never quite understood school spirit until I came here,” she said, “and I’ve realized that to love the school you attend, you have to find that sense of community. UW–Madison embraces diversity of all kinds, and I want to assure you that if you were like me, and thought you’d never find a place in this world that felt comfortable for you, that you will. “

“Each one of you has had a unique journey to get here, and I want every single one of you to know — you belong here,” she said. “This is your time to explore, to expand your horizons, and to become the adult you want to be in the world.”

Many of the students in attendance said they are ready to put the pandemic behind them as much as possible, and that they’re thrilled to be able to attend in-person classes and events.

“I take my education seriously, so I’m really excited to get to go in and meet my professors and engage in person with my peers and instructors and TAs,” said Wyatt Ystesund, a freshman math major from Cedarburg, Wisconsin.

Kira Nevin, a freshman biomedical engineering major from Menomonie, Wisconsin, said she’s wanted to attend UW–Madison her entire life. She was taking it all in Friday.

“I’ll probably be a little more nervous on the first day of classes, but right now, I’m feeling great,” she said.

As they exited the Kohl Center, students received a free copy of the book selected for this year’s Go Big Read, the campus common reading program. “Transcendent Kingdom,” a novel by Yaa Gyasi, follows a graduate student in neuroscience as she examines her family’s experience of immigrating and her own place in the world.

Just prior to convocation, new students enjoyed a lunch provided by the Chancellor’s Office. Afterwards, they could enjoy an ice cream social, a Badger Welcome BBQ and a Night at the Overture concert, all part of Wisconsin Welcome and Wisconsin Welcome Back events.