Chemo: More Side Effects This Time Around

by admin July 29, 2020
Thomas's second cycle of chemotherapy, which included different drugs than the first, has been rougher on him so far, as the doctor said it would be. In fact, the doctor anticipated quite well that Thomas would be vomiting on Days 2 and 3 with appetite suppressed through Day 4 and then starting on the upswing. While it was sobering to go through it, we feel grateful that this treatment is still not as radically challenging as some cancer treatments are.
The unexpected challenge of this next step in Thomas's cancer treatment is how to give him so many medications. I somehow thought he would receive his chemotherapy only, but it did not occur to me that cancer treatment would come with a whole constellation of associated medications. I now realize we might be just at the beginning of a growing list of medications, as Thomas is doing very well, but known side effects or complications that come later in the process bring all their own meds, too.
First, I was told I had to learn how to give Thomas a shot the day after his chemotherapy--that was unexpected! On top of that, it turns out I would be giving Thomas initially five different medications in ten doses (and, really, we should have been waking him in the night to give him additional doses for better anti-emetic management, which we will do next time). 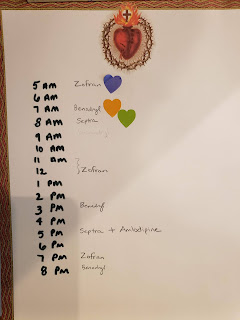 On our first day home, I could see that Thomas was losing his docile nature as he perceived no rhyme or reason to why I kept approaching him seemingly constantly with yet more medication. He became upset with me over the course of the day!
Therefore, I created a Medication Plan of the Day that I would write out each morning so that he could talk it over and know with assurance what was coming and how many times he would have to exercise fortitude. I had him put a sticker next to each medication name after he took it. (I felt sorrowful that I had little to reward him with. He wasn't eating any food, so I couldn't offer him food treats. I was going to allow my vomiting child to watch as much TV as he wanted, so I couldn't withhold TV only to reward him with it. I couldn't offer to take him anywhere or see anyone because of germs. It was just so pitiful.)
Just like Thomas's need to know everything about his blood draws and needle work, he is working on memorizing the names of his medications and the purpose of each. He asks me to review it with him daily.
It was taking about a half an hour for him to take each medicine, so do the math and it was at least 5 hours a day initially. Thomas will get better at it, we parents will get better at it, we will learn more tricks. Also, we switched two medications to a chewable pill and that is a game-changer. That leaves Thomas with only one liquid medication right now. 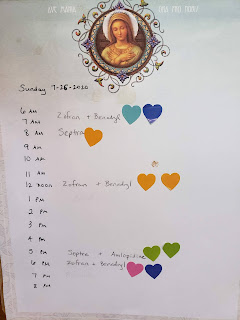 For a couple of days, Thomas was vomiting significantly, even though taking anti-emetics every three hours, and he hardly ate anything, as I'd been told to expect. Below I was tempting him with a milkshake and his remained untouched. I was glad when he resumed eating again and I'm grateful that I think his appetite should be good for a couple of weeks before chemo again. 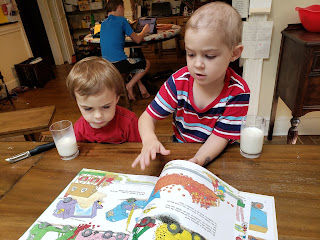 I did not take many photos of Thomas feeling miserable, but tried to catch a few sweet moments when all the medications were working right . . . Thomas wearing his coon skin cap, moccasins, and holding us up at gunpoint! 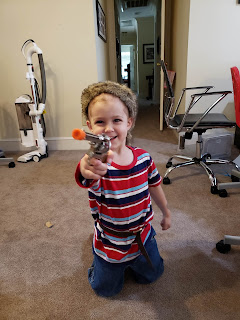 He is needing more sleep than usual: I imagine that the work being done on a cellular level is exhausting. He likes listening to a CD story during quiet time, although does not nap often at this age. Since this latest dose of chemotherapy, Thomas seems to "hit the wall" right when we are serving dinner around 5:00, asks to go to sleep, and takes about five minutes to fall asleep where he is snoozing hard by 6:00 p.m. and for the next 12 to 13 hours (with wakings, of course).
I've been so appreciative of meals from friends over the last few days. Tom seems to need me a lot right at the dinner hour, so I've been able to leave the kids eating their meal and I can just disappear to help Thomas get to bed. He asks me, "Lay with me, Mama!" Coming from the independent sleeper who would say I took up too much room on his bed and bothered him, and would I please go sit in the chair?, having him ask me to sleep on his little mattress with our bodies touching is poignant to me.

Each member of our family will have so much more experience a few cycles of chemo from now. Now on Day 6, Thomas is the upswing. He is not taking any anti-emetics and he is eating. He is playing, but I can also tell he isn't as strong. For example, today we went on our first family walk in six weeks and he insisted on walking himself, where he made it about two blocks before needing to ride in the stroller the rest of the time.
What will happen for the rest of this chemo cycle (15 more days)? He should be feeling good in most ways, but his immune system numbers and likely platelets will be going down significantly from here, and I have no idea how that makes him feel.
Overall, we are grateful.
Back to Feed
Use left/right arrows to navigate the slideshow or swipe left/right if using a mobile device