Botley the Coding Robot 2.0 Is the Ultimate STEM Toy

Coding robots, in addition to just being weird and fun, help kids develop problem-solving skills and teach them about sequences and algorithms. Simply put, they help kids figure out that step A leads to step B leads to step C. And if something goes wrong, little coders have to go back and untangle what happened. They’re great STEM toys, and can be a key part of STEM learning. But given that so many kids already spend hours a day glued to screens, giving them a toy that requires an iPad seems, well, counterintuitive at best. That’s why we love Botley the Coding Robot. 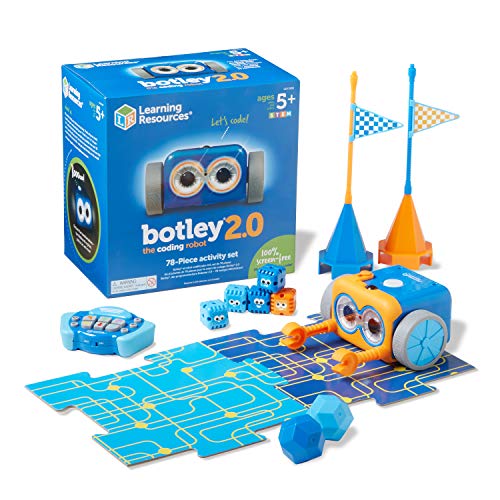 This coding robot is entirely screen-free.

Botley 2.0 comes as part of a 78-piece activity set, and kids as young as 5 can code him to move around an obstacle course, navigate a maze, or knock down blocks. Because knocking down blocks never gets old. He can follow a sequence of 150 steps, and move in six directions. He looks weirdly quirky — two huge eyes on a pair of wheels — and is cute without being intimidating. Which is the point: Kids will think of him as a pet, as opposed to a math project.

Botley 2.0 the Coding Robot is the newer incarnation of the original Botley, and has some extra features. Both Botleys are screen-free and can detect objects, but Botley 2.0 also has night vision, better memory, light-up eyes, and the ability to make 45-degree turns, in addition to new games and codes.

Programming Botley takes concentration, but not a lot of effort, which is key, so kids don’t get discouraged. They program him with a code, and then he executes that code. Say you want Botley to go in a straight line, then spin around, and then stop: Kids needs to think a few steps ahead and plan the desired sequence in advance. That helps them with logical, linear thinking.

But above and beyond all else, Botley is fun. He can turn into a train or a car. He has a siren. He sidesteps things in his way. And he does all that, without parents having to download a single app.

Every product on Fatherly is independently selected by our editors, writers, and experts. If you click a link on our site and buy something, we may earn an affiliate commission.

The post Botley the Coding Robot 2.0 Is the Ultimate STEM Toy appeared first on Fatherly.